This photo was captured midday, and we all know that’s not the most flattering time for shooting.  Well, sometimes you don’t get to choose the time of the shoot…. In these kind of situations you have to make the best out of the day, especially if you are shooting for a client! 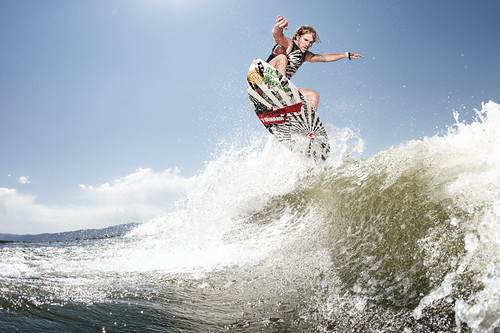 This is a photo of James McCotter wakesurfing behind a boat.  Wakesurfing is so much fun that if you haven’t tried it, we highly recommend that you try it first to get a feel for what you are shooting.  For those of you who don’t know, wakesurfing is when you surf on the boat’s wake.  The boat is moving at about 10mph, and weight needs to be placed on one side of the boat for better and deeper wake.  It is way mellower than wakeboarding, a rope is required just at take off, and the rider is about one to five feet away from the boat which makes it much easier for us to shoot.

The lighting for this shot was pretty simple, a single flash head and some sun light, that’s it.  An AB1600 was mounted to the boat with a Magic Arm and a Super Clamp.  To make James stand out even more we wanted to add a rim light around him.  Since it is a water sport we would usually need a second boat to do that, in this case we decided to use the sun.  As we were cruising around the lake, we had to wait for the sun to get behind James, just outside the frame.  Then adjust the exposure and take the shot.

The boat had a small wooden ramp right at the end of it, so it was easy enough to stand on and get real low in order to get better perspective and make the wake look big(bigger than it really is).  Another thing that helped us emphasize the size of the wave is the ultra wide angle lens.  In this case a 15mm fisheye on a Canon 1D with a 1.3x crop factor.  The crop factor takes away a lot of the fisheye distortion, but makes for a really wide lens with just enough distortion to spice things up.

The flash was powered with a Vagabond mini and triggered with PocketWizards.  Using the Mini TT1 in hyper sync mode allowed us to push the sync speed even further and underexpose the sky a bit.  You can learn more about hypersync mode on the PocketWizard site here.

To conclude, what you need so you can get a shot like this is:  A single and somewhat powerful flash, some sun light, a Pocketwizard Mini TT1 to get some extra sync speed, and some real talent.  Be aware that when you get low,  you will be getting pretty close to the water and you have to be careful with you camera.  This is especially true if you are playing with salt water, because that’s the last thing you want on your camera. 10 Tips to Improve Your Surf Shots