Shots composed between trees or other objects always have an extra kick of excitement.  When you take great action, and add some branches, the image is taken up from level 10, and cranked all the way to 11! 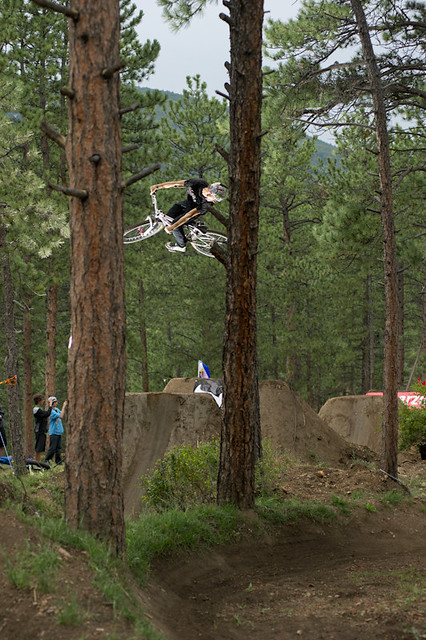 Photo and Article by Connor Walberg

Sure, it may seem like something this simple can't possibly make that much of a difference, but there's something about looking through a window to see the action.  It makes the elements more realistic and relatable.

This was taken at a bike session in the foothills of Colorado.  Many incredible athletes were there sessioning these jumps all day and pulling some sick tricks.  Opportunities like this one are incredible because it gives you the chance to shoot lots of top level athletes, all throwing down tricks that most people cannot.  But finding things like this is tricky.  Try asking local bike shops if they know of any dirt jumping events coming up around the state, and see if you an score an invite to go shoot!  Exchanging some photos for the opportunity almost always works!

After first getting to the event, I walked around a little bit with my camera to get a feel for which feature I wanted to shoot, and what angles would work.  There were several other jumps that the athletes were hitting, but this seemed to be the one they were most comfortable throwing tricks on.  This is a good lesson because it's generally best to shoot photos with a great trick, even if another feature is bigger and better. (like the next jump you see in the line)

I actually stumbled on this angle by chance.  While walking around looking for angles, I was moving from one location to the next and looked over right as an athlete was hitting the jump between the trees.  It caught me immediately and I ran down to set up my lights for the angle.  I placed an Sb-900 under the middle of the jump at full power to really brighten up the athlete.  Since a lot of the athletes were in dark colors, I needed the light to be a bit stronger to make them stick out from background.  I also zoomed it a bit to avoid too much light spill on the trees around him.

Then I placed an AlienBee B1600 off to the side around 1/4 power and raised it up to about 6 or 7 feet.  This mainly just added more light to the 900, but also helped the light wrap around the athlete a bit more.  Since I could see the AlienBee in the shot, I had to make a few quick runs down to move it so that it would be perfectly hidden by the tree on the left.  The 900 was fine because it was in the middle of the jump, which is almost always a great place to get awesome lighting, without a ton of spill.

I crouched low to the ground to get the top of the mountain in the background, and composed so that the athlete would be off-center, and you could see down the line a bit more.  If I could do it again, I would have zoomed in a bit more even since I now know how high the athlete was going.  The other athletes that weren't spinning were barely fitting in the frame, which I why I was pulled out like this.  I also used a good zoom lens and stepped back a bit so that the jump line would become more compressed, and the mountain in the background would be pulled in more.

Maybe the main reason that shots like this work is because they add a level of spontaneity.  It looks almost as if the shot was an accident, and the athlete popped into my scenic shot.  Whatever the reason, shots composed using framing always seem to have an incredible feel!